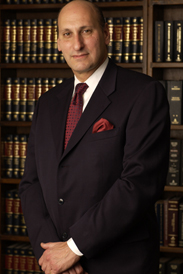 
Richard H. Rosenberg graduated from St. John’s University School of Law in Queens and was admitted to practice law in New York State, and in the United States District Court of the Eastern and Southern Districts of New York in 1975. He was also admitted to practice law in the State of New Jersey, and in the Federal District Court of New Jersey in 1983. As Corporation Counsel for the City of New York, Mr. Rosenberg was involved in cases regarding accidents that involved public property such as schools, parks, playgrounds, sidewalks, police, and other government vehicles. He was also an Arbitrator in Bronx County Civil Court and an Assistant to the Corporation Counsel for the City of New York from 1975-1980. Mr. Rosenberg joined Howard Ross in representing the innocent victims of accidents at the law firm of Chasin, Levine & Ross in 1981 and has continued handling plaintiff’s litigation since that time. In 1994, Mr. Rosenberg founded the firm of Rosengarten & Rosenberg in Manhattan, and merged his portion of that firm with the firm of Ross, Legan, Rosenberg, Zelen & Flaks, LLP in 1997. Mr. Rosenberg currently heads the firm’s New Jersey Litigation Practice Group.