Howard B. Ross, Of Counsel 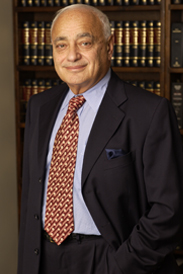 
Howard B. Ross, a founding partner of the firm of Ross, Legan, Rosenberg, Zelen & Flaks, LLP, graduated from New York Law School in 1967 and was admitted to practice law in New York State in 1969. Mr. Ross previously served as an attorney in the Kings County Family Court. His career eventually led to him a position as an associate at the law firm of Chasin & Levine where he was very quickly promoted to partner. As a partner at Chasin, Levine & Ross, the law firm expanded and very successfully litigated cases on behalf of accident victims and medical malpractice victims for 30 years. In 1997, Mr. Ross merged his equity in the Chasin, Levine & Ross law firm into Ross, Legan, Rosenberg, Zelen & Flaks LLP. Mr. Ross still actively litigates on behalf of accident and malpractice victims as he has for more than 45 years. Additionally, Mr. Ross has extensive experience in estate planning and probate and is actively involved in many local community organizations and affiliations where he serves as an outside counsel.